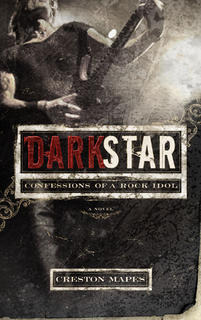 Imagine if you will, a heavily tattooed rock star with long hair and a metal ring in his nose. Intoxicated on drugs and alcohol, he leads the frenzied crowd, refutes the existence of God, and indoctrinates the multitudes in the belief that there is no heaven or hell, but simply the Other Side.

Would you spend your life praying for this man? Would you regularly take the time to send him gifts and write to him about God's love and Christ's redeeming grace?

Karen Bayliss does. Karen realizes the danger Everett places himself and thousands of his devoted fans in. But Karen isn't the only one trying to influence Everett's life.

Endora Crystal is also battling over his soul. As Everett's personal psychic, Endora leads him deeper into the occult and tells him everything he longs to hear. His fans love him; he is their leader, their savior. It is his destiny to lead them to the Other Side. The spiritual battle over Everett's soul comes to a climax when Endora is found dead and Everett is charged with first-degree murder.

Written memoir style, Creston Mapes's debut novel pulls readers into a two-fold story. DARK STAR leads us through the present day courtroom battle, worthy of any John Grisham novel, while taking us back to recount Everett's life leading up to his trial.

Although DARK STAR was a riveting read from start to finish, there were a couple of minor stumbling blocks for me.

Everett's dialogue didn’t seem realistic of a drug addicted rocker. It seemed too polished. Don’t get me wrong. I didn’t expect Ozzy Osbourne language in a CBA novel, but a certain amount of grittiness is expected to make Everett a believable character.

A plot twist toward the end also struck me as a little unrealistic. Throughout the novel, Karen claims she is only interested in Everett’s salvation. She has no starry-eyed, romantic illusions. It came as a bit of a surprise then, when Everett and Karen meet for the first time and romantic fireworks ignite. At this point I felt I had been misled.

Long after I closed the back cover, DARK STAR continued to invade my thoughts. Its characters remained in my mind, forcing me to reflect on the power of intercessory prayer and the spiritual battle continually fought over each of our souls. Included at the back of the book is a set of discussion questions that deepen your understanding of the book's themes of sin and redemption, and God's unconditional love.

It's not often you come across such a powerful book by a first time novelist. Creston Mapes is a rare find, an author to keep your eye on. Do you ever feel left out? Rejected by the ‘beautiful’ people? Made to feel inadequate?

In the opening chapter of The Martyr’s Song, we meet Marci, a girl who knows first-hand what it means to feel rejected. With lowered eyes, she forces herself forward, through the crowd and toward the school building and her locker. The new skirt she had saved up for months to buy no longer gave her the courage she had hoped for. Instead she is met with taunting comments.

Nothing they could say could embarrass her any further. Of the entire eleventh grade, she was the only one not invited to tonight’s party.

“Please, she isn’t even going. And if she showed up in that, we’d have to lock her in the bathroom to keep the boys from throwing up.”

They skip away, leaving behind painful wounds and an empty school.

As she stands in the vacant school hallway, a woman approaches. “Come to my flower shop tomorrow, and I will make you beautiful,” the woman promises.

Marci is stung by the woman’s words, angered that even this stranger has the nerve to call her ‘ugly’. The next day Marci does go to the flower shop, not to let the woman ‘make her beautiful’ but to tell the woman exactly what she thinks of her, and her offer.

But when Marci arrives at the shop, she discovers that the woman, Eve, wasn’t talking about physical beauty, or even inner beauty.

Eve tells Marci that true beauty will come to her only when she embraces a long-forgotten story. Eve then tells Marci the story of Father Michael and thirteen-year-old Nadia, a child considered ugly with her coarse looks, blotchy freckles, and left leg two inches shorter than her right.

And so begins Dekker’s story within a story, a retelling of a tale contained in the opening pages of Ted Dekker’s When Heaven Weeps, the second title of his earlier Martyr’s Song series.

The story is set in war torn Bosnia, in the 1940s. A group of soldiers, lead by Commander Karadzic, comes across a small village, untouched by the combat that surrounds it. Karadzic is intent on restoring Serbia, purging anyone he doesn’t consider a good Serb, especially Franciscans who approved the murder of hundreds of thousands of Serbs by Yugoslavia’s Ustashe army.

Unable to understand why this church remains standing when all the others within a hundred kilometres have been burned to the ground, Karadzic becomes convinced it is a Franciscan church, protected by the Ustashe. When he finds Father Michael and the remaining villagers in the church courtyard celebrating Nadia’s birthday, he decides to put the villagers’ faith to the test, with deadly results.

As Karadzic’s inhuman game unfolds, readers glimpse life beyond the present through the eyes of Father Michael. The skin of this world peels away to reveal the world that awaits; a world full of laughter and a song that caresses the soul. A world where Nadia is beautiful.

By the time Eve finishes the story, Marci knows a secret that will change her life forever. She learns that in the eyes of heaven we are all beautiful, even her.

The Martyr’s Song, poignant in its first telling within When Heaven Weeps, is even more so in this novella which includes a CD of a song performed by Todd Agnew and co-written by Agnew and Dekker exclusively for this book. A list of discussion questions at the back of the book draws readers deeper into the book’s theme. Dekker invites us to search our souls and discover if we are in true anticipation of heaven, or simply enamored with our temporal life on earth.

This book struck my heart in a powerful way. Like Marci, I struggled with feelings of insignificance, and fought to fit in when considered the ‘outsider’. Unlike Marci, I didn’t have an Eve in my life to teach me what every child in this situation needs to learn.

I believe this book is a must read for any teenager who struggles with issues of self-worth, or who faces peer pressure to conform to today’s standards. Once more Dekker reaches out through story to expand our imagination and teach a timeless message. Once more I have been changed as a result.

Featured by World Vision during its 30 Hour Famine campaign, THE MARTYR’S SONG is set to reach the youth of today with a powerful message to love all that cross our path.