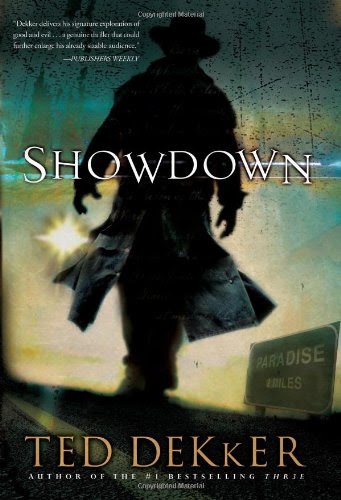 : a place or state of bliss, felicity, or delight

Evil is about to visit .

When Marsuvees Black arrived in offering the residents Grace and Hope, no one expected what was about to happen to their small community. No one except Johnny Drake.

Johnny had witnessed Black’s arrival in town, with his black trench coat flapping in the breeze, black steel-toed cowboy boots kicking up the dust, and black hat down over his eyes. Very much the modern day Zorro. But Zorro wouldn’t have done what happened next. And nobody was about to heed Johnny’s warning.

Marsuvees Black was, after all, a man sent from God.

As thick thunder clouds gather overhead and sandstorms whip the town, it soon becomes apparent that something in is amiss.

High in the mountain canyons near is a hidden monastery, home to Project Showdown. Secluded from the rest of the world, David Abraham sequesters thirty-seven orphans and their thirteen teachers in the monastery to test a controversial theory: an examination of faith and human nature.

David always knew that one day the students would test the boundaries. But when Billy, one of the orphans, challenges the monk’s teachings, doubts arise as to whether the children are ready to taste the evil that is about to enfold the monastery and .

Ted Dekker raises the bar with SHOWDOWN, an exploration of the effects of evil upon innocence. In true Dekker style, we are pulled into a novel that isn’t as it first appears.

Trying to guess the ending of a Dekker book is near impossible. SHOWDOWN is no exception. With a fast paced plot, multiple twists, and surprises at every turn, predicting when you will next put this book down is difficult enough.

Dekker shakes things up with this novel. It’s edgier than his previous work, even graphic in places. But then, evil is graphic. In a recent post on his forum, Ted writes: ‘I also refuse to characterize evil in ways that are untruthful about its true nature.’ In SHOWDOWN, Ted represents the depravity that lies in the heart of all humans effectively. Some may find this extreme in its means, but that just adds to the power of the message contained in this book.

SHOWDOWN explores the consequences of free will. We are all born with evil in our hearts, but it is up to us as to whether we will give in to that evil and explore its ways.

Can pure faith really move mountains? That is the question David Abraham set out to answer in the hidden monastery. To have the innocent faith of a child is the treasure we must all strive for.

Once again, Ted Dekker has presented a moral dilemma which leads me to examine my faith and explore the purity of my heart. Ever since the publication of her novella, THE PENNY WHISTLE, readers have asked B.J. for more of the story. With A DISTANT MUSIC, B.J. delivers the first installment, and it’s a novel that will tug at your heart and fill you with hope. Skingle Creek in the late 1800’s is a small coal mining community whose inhabitants have little of the ‘extras’ in life. But it is also a community where people genuinely care for one another and are willing to sacrifice what little they have to help those in need.

It comes as little surprise then when Maggie MacAuley turns to those around her in a desperate attempt to save their schoolteacher, Jonathan Stuart. Ever since Mr. Stuart’s flute has gone missing, he has grown sicker and weaker by the day. With the help of her classmates, Maggie hatches a plan to bring music back into their teacher’s life, and hopefully renew his strength. But will the desperate plight of Widow Hunnicutt and the Crawford family put an end to Maggie’s plan?

It seems to Maggie that God has lost interest in the good people around her. Not only is her teacher fading away, but her best friend, the ailing Summer Rankin, is also waning by the day, spending more time in bed than at school. Then there is the matter of Kenny Tallman and the class bullies. In Kenny’s attempt to save Maggie from a beating, Kenny puts up with the abuse from the bullies and swears Maggie to secrecy. But just how long will his heroism continue to protect her?

Maggie struggles to understand how God can know about everything and care about it all when those around her struggle with ill health, hunger, and bullies. How can a loving God let bad things happen to good people?

Picking up a B.J. Hoff novel guarantees that you will be transported into another time filled with captivating characters. Book #1 of the new Mountain Song Legacy series, A DISTANT MUSIC, is no exception.

B.J. Hoff’s gift of bringing characters to life shines in A DISTANT MUSIC. I found myself drawn into Maggie MacAuley’s troubles and shed more than a tear or two with her.

A DISTANT MUSIC is an enchanting read that touches the heart. Once more B.J. proves that when it comes to the historical voice, she is the master. B.J. tells us that this is the just the beginning, with more to come. I, for one, am eagerly awaiting the rest of the Mountain Song Legacy.

Like Maggie, I often struggle to understand why bad things happen to good people. I find reflecting on Jeremiah 29:11 and Romans 8:28 always helps at these times. Although we may not know why certain things happen, God has it all planned out and offers us hope if we would only place our trust in Him.
A DISTANT MUSIC is a reminder of that hope we have in Christ and His sovereign plan.

Posted by Illuminating Fiction at 3:38 PM No comments: