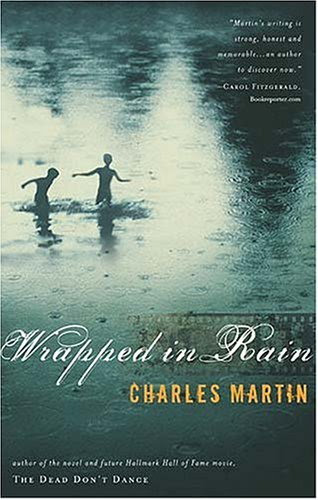 Of the 25 books I recently read for the 2006 Christy Awards, Wrapped in Rain by Charles Martin stood out from the rest for me. This southern coming home novel is filled with compelling characters, bittersweet moments, and a lesson for all of us.

At the age of six, Tucker Mason’s secluded life at Waverly Hall becomes a little more bearable. His father, Rex Mason, arrives one night with a boy in tow and offers eight words of introduction. “This is Matthew . . . Mason. Apparently, he’s my son.” The two boys are left in the care of Miss Ella Rain, a local woman hired by Rex to keep them out of sight.

As adults, Tucker and Mutt (Matthew) now struggle with the memories of a childhood at the hands of a father who didn’t want them and memories of “Mama” Ella’s death.

Tucker returns home from a photo shoot late at night to find a woman and child stranded on the side of the road. He offers them shelter for the night and puts them up in Miss Ella’s house, only to discover the woman is Katie, a childhood friend now running from an abusive husband.

When Mutt escapes from the mental hospital, Tucker is faced with the decision to place Mutt in a more secure facility. Against medical advice, Tucker chooses instead to take Mutt back to Waverly Hall.

Can their former childhood home help ease the voices in Mutt’s head, and can Miss Ella’s soft promptings help Tucker reconcile his past and place a hope for a future in his heart?

Wrapped in Rain had me laughing out loud one minute, and crying the next. Charles Martin has a gift for bringing his characters to life and placing them firmly in the reader’s heart. My heart broke many times for Mutt. His antics were both funny and poignant, and helped me understand the mind of someone battling a mental illness. From Miss Ella, I learned that strength resides in the meek. This woman of faith was strong under adversity, and her legacy to the boys was one of soft spoken words to guide them and endless hours on her knees in prayer. And then there was little Jase, the son of Tucker’s old girlfriend, Katie. His sweet innocence was both refreshing and heartwarming.

If you only read one book this year, read Wrapped in Rain. Let it soothe your heart and bring you before the Throne Room. 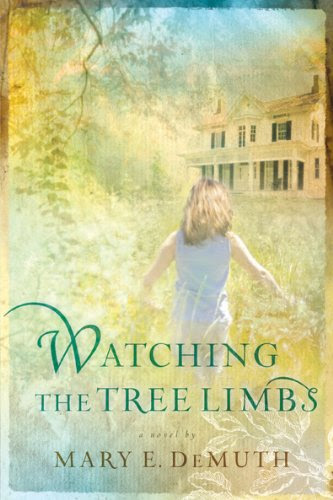 Mara Weatherall was happy in Little Pine. Her heart was filled with Nanny Lynn, who loved on her and taught her the simple things in life. Mara didn’t wonder too much on who her parents were, or where they were.

But when Nanny Lynn dies and Aunt Elma sells the family farm, nine-year-old Mara finds herself in a new town, Burl, Texas. With a new town come new friends, and new experiences.

As the hot summer days drag on, Aunt Elma wearies of Mara’s constant questions and shoos her outside. Mara searches for a friend to fill her days and soon meets an older boy who goes by the name of General. In the brambles of , General teaches Mara things no nine-year-old should know amid threats to her life, and those closest to her, should she tell.

As Mara struggles with her secret, she meets Camilla, an eleven-year-old with secrets of her own. The two girls form a friendship that survives the trial of separation when Aunt Elma suddenly dies and Mara finds herself in a strange mansion on the other side of town—where the criminals live.

A whole new world awaits Mara as she learns that the elderly man who owns the mansion could unlock the secrets to her parentage. She is embraced by the housekeeper, Zady, and introduced to a new school and church where Mara’s is the only white face.

A new life stretches out before her, but is it one that can protect her from General?

Watching the Tree Limbs, Mary DeMuth’s debut novel, captivated me from start to finish. Through poignant storytelling, DeMuth strips away the convention of shying away from the evils of this world, which is found in many of today’s Christian novels. Its topics may be a little controversial for some conservative Christians, but an underlying message of hope, laced with grace and healing, is woven throughout the pages to ultimately uplift the reader.

With delicacy, DeMuth highlights the heartache of childhood rape, ensuring that Mara’s story will remain with readers long after they close the book. The story will minister to those who have faced childhood abuse, and provide a fresh understanding of the issue for those who haven’t been touched by this pain.

Watching the Tree Limbs is the novel not to be missed. Open its pages and let the healing balm of Mara’s story touch your soul.

Watching the Tree Limbs is written with a tender understanding of childhood rape. How did this story come to you, and what compelled you to tell it?

I saw this girl. She stood outside in the hot sun. A bully approached her. That picture started the novel. I wanted to tell Mara’s story because there are far too many in the world, me being one of them. As a survivor of childhood rape, I have struggled through many things and yet God has done some amazing healing. He has redeemed me. I wanted to give other victims hope that God sees and He can heal. I wanted to help those who haven’t been violated in this way an accurate picture of the soul damage sexual abuse can do. And, above all, I wanted to write a page-turning story that stuck with the reader long after he/she put it down.

What do you hope readers will take away with them after finishing this book?

A deeper desire to follow Jesus fiercely. A longing to be healed and set free.

You did a wonderful job of weaving redemption into the story. Do you have any advice for other authors who struggle with this?

Redemption should be part of the fabric of the story, not a bauble or decoration added slipshod at the end. It must come through the plot, through the characters. Above all, try not to preach. Show redemption, don’t tell it.

You’ve published both fiction and non-fiction books. Which do you find the easiest to write and do you find one more satisfying than the other?

It’s easier for me to write fiction, and it is more satisfying. However, I’m thrilled to see the reach of non-fiction.

What do readers have to look forward to in the future from Mary DeMuth?