Author Colleen Coble’s thirty-five novels and novellas have won or finaled in awards ranging from the Romance Writers of America prestigious RITA, the Holt Medallion, the ACFW Book of the Year, the Daphne du Maurier, National Readers’ Choice, the Booksellers Best, and the 2009 Best Books of Indiana-Fiction award. She writes romantic mysteries because she loves to see justice prevail and love begin with a happy ending.

A word from Colleen: God has been faithful, though the path has not been easy. Nothing worth doing is ever easy. God wouldn’t let me give up, and I like to think the struggle made me stronger. God has given me so much in my life, most importantly my great family, a loving church family at New Life Baptist Church, and my wonderful publishing family at Nelson Books. 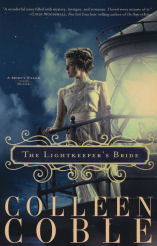 A thrilling romantic mystery set in the lush Victorian age.

Central Operator Katie Russell's inquisitive ways have just uncovered her parents' plan for her marriage to wealthy bachelor Bartholomew Foster. Her heart is unmoved, but she knows the match will bring her family status and respectability.

Then Katie overhears a phone conversation that makes her uneasy and asks authorities to investigate. But the caller is nowhere to be found. Mysterious connections arise between the caller and a ship lost at sea.

Against propriety, Katie questions the new lighthouse keeper, Will Jesperson. Then a smallpox epidemic forces their quarantine in his lighthouse. Though of low social status, Will's bravery and kindness remove Katie's suspicion and win her love. Katie and Will together work to solve the mystery of the missing girl and the lost ship as God gives the couple the desire of their hearts.

If you would like to read the first chapter of The Lightkeeper's Bride, go HERE.
Posted by Illuminating Fiction at 5:36 PM No comments:

Melanie Dobson is the award-winning author of The Black Cloister; Love Finds You in Liberty, Indiana; and Together for Good.

Rural America - 1928. After the murder of his partner, Detective Rollin Wells hides away in an Amish home near Sugarcreek, Ohio, to find out who in the police force is collaborating with Cleveland’s notorious mob. While Rollin searches for answers to his partner’s death, he befriends an elusive young Amish woman named Katie and her young son. As Rollin learns about Katie’s past, he’s shocked at the secret Katie is hiding - a secret that has haunted Rollin for eight years.

If you would like to read the first chapter of The Silent Order, go HERE.
Posted by Illuminating Fiction at 5:38 PM No comments: