That is...until he meets his unlikely team of officers.

As Yeager soon finds out, not all the crazies are on the street. An undercover rookie, the audaciously honest Mackenzie "Mack" Hazard sends Yeager's blood pressure skyrocketing by wearing her faith like an ever-present badge. Then there's Jesse Lunden, a maverick undercover officer who refuses to learn anything from an old guy with a cane. Can this tangle of egos and eccentrics be trained into a lean, mean, crime-fighting machine...even while they are being drawn into something much bigger and more dangerous than anyone imagined? 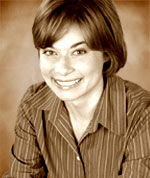 To find out more about Rene and her books, visit her Web site: http://www.renegutteridge.com/splash.html

IT’S NOT THE END OF THE WORLD—WHICH COULD BE A PROBLEM...

Mark Hogan has it all. The job. The family. A position on the board at church. All he’s missing is a boat. Not just any boat—a 2008 Bayliner 192.

When Reverend Daniel Glory announces that the Rapture is taking place on October 17 at 5:51am, Hogan realizes his boat–buying days are numbered. So he does what any man in his situation would do—he borrows a load of money from the mob.

Not that there’s any risk involved: After all, when the Rapture comes, Hogan will be long gone. The mob will never find him.

But when Jesus fails to come back on schedule, Mark Hogan finds the mob is in no mood to discuss the finer points of end–times theology...

Chris Well’s laugh–out–loud Christian thrillers appeal to the millions of readers who gobble up the rollicking crime fiction of Janet Evanovich and Elmore Leonard. TRIBULATION HOUSE does not disappoint!

Chris Well is a fellow member of the CFBA and founder of its sister organization, FIRST. He is an acclaimed novelist and award–winning magazine editor and has previously written the “laugh–out–loud Christian thrillers” Deliver Us from Evelyn and Forgiving Solomon Long (one of Booklist’s Top 10 Christian Novels of 2005). He has also contributed to 7ball, Infuze, and Alfred Hitchcock’s Mystery Magazine. Chris and his wife live in Tennessee, where he is hard at work on his next novel.

Tribulation House took me totally by surprise. Categorized as suspense, I didn’t expect a laugh out loud novel, but that is precisely what I discovered.

Memorable characters include a bumbling cop, two mismatched mobster heavy men, and Mark Hogan, who is looking to fulfil his dreams before the Rapture occurs.

Unfortunately, things don’t quite go according to plan for Mark. As the appointed time for Jesus’ arrival draws closer, Mark realises his boat buying dream might not become a reality. With his options running out, Mark turns to the mobster heavy men for the needed cash. Once Jesus returns, all will be fine. Mark will have enjoyed his boat for a few days, would then be swept away in the Rapture, thus leaving behind his money worries.

Well, it would have been if Jesus had bothered to show up when predicted. But he didn’t.

This book gripped me from start to—well, nearly finish. I was a little surprised to find a seemingly unrelated plotline develop late in the book. This rogue plotline eventually tied in on the last few pages to leave readers hooked for a continuation.

Tribulation House not only entertains, it also packs a morality punch.