Robin Parrish had two great ambitions in his life: to have a family, and to be a published novelist. In March of 2005, he proposed to his future wife the same week he signed his first book contract with Bethany House Publishers. They contracted him for the rights to not only that first book, Relentless -- but two sequels including Fearless and Merciless. A trilogy that unfolded in the consecutive summers of 2006, 2007, and 2008.

"Every Person on This Planet Has Disappeared."

Commander Christopher Burke and his crew are humanity's greatest explorers. They've finished their mission on the red dirt of Mars and now they just want to get back to Earth. To see friends, family, and loved ones. To be home. But even with communication to ground control cut and a perilous landing, nothing could prepare the crew for what they discover when they step foot back on planet Earth.

It's not a dream. It's not a trick. Now Burke and his team have one mission: find out who or what is behind the disappearance of all mankind.

If you would like to read the first chapter of Offworld, go HERE 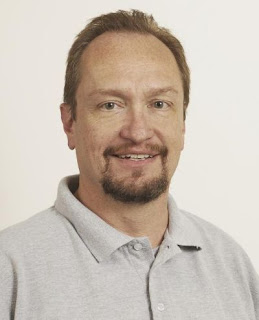 He has launched, edited or contributed to numerous national publications and is an award-winning adventure-travel writer. A popular speaker, he is also active in both evangelism and the arts. Morrisey earned an MFA in creative writing from Bowling Green State University, and his fiction has been featured in numerous anthologies and magazines.

His first novel, Yucatan Deep (Zondervan, 2002) was a finalist for the Christy award, and he is the author of six novels, including Wind River and In High Places. In addition Tom has also written two nonfiction books: 20 American Peaks & Crags (Contemporary Books, 1978) and Wild by Nature (Baker Books, 2001). He and his family live in Orlando, Florida. 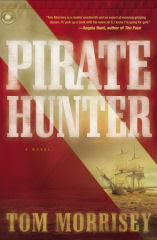 High Seas Adventure Meets a High-Tech Quest for Pirate Gold West Indies, 18th century Young Ted Bascombe is rescued by notorious pirate Captain Henry Thatch, finding himself caught up in a world of crime, adventure, and a daily fight for freedom.... Key West, 21st century Marine archaeologist Greg Rhode embarks on a treasure-hunting expedition in the turquoise waters of the Florida Keys, but he's as beguiled by a beautiful diver with different-colored eyes as by the lure of pirate gold...The Hunt Is On! Interweaving these two stories, pro deep-sea diver Tom Morrisey spins a multilayered tale of two young men's quests to escape their past by losing themselves to adventure on the high seas. Romantic and thrilling, this unique novel explores the timeless truth that "where your treasure is, there your heart will be also."

If you would like to read the first chapter of Pirate Hunter, go HERE
Posted by Illuminating Fiction at 1:50 PM No comments:

Adam Blumer lives in Michigan’s Upper Peninsula with his wife, Kim, and his daughters, Laura and Julia. 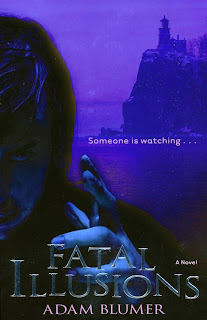 An amateur magician, an unassuming family . . . a fatal illusion Haydon Owens wants to be the next Houdini. He has been practicing his craft and has already made four women disappear. All it took was a bit of rope and his two bare hands.

The Thayer family has come to the north woods of Newberry, Michigan, looking for refuge, a peaceful sanctuary from a shattered past. But they are not alone. Little do they know that they are about to become part of Haydon's next act. Time is running out and already the killer has spotted his next victim. Who will escape alive?

If you would like to read the first chapter of Fatal Illusions, go HERE

“Fatal Illusions is an engaging, fast-paced read with a captivating storyline that grabs you from page one and doesn't let go. Highly recommended!”--Mark Mynheir, homicide detective and author of The Night Watchman

“Adam Blumer tells a fast-paced story that weaves together a serial killer, a physically wounded pastor and his spiritually wounded wife. The twists and turns will keep readers guessing.”--Rick Acker, author of Blood Brothers

Brandilyn Collins is an award-winning and best-selling novelist known for her trademark Seatbelt Suspense®. These harrowing crime thrillers have earned her the tagline "Don't forget to b r e a t h e . . ."® Brandilyn's first book, A Question of Innocence, was a true crime published by Avon in 1995. Its promotion landed her on local and national TV and radio, including the Phil Donahue and Leeza talk shows. Brandilyn is also known for her distinctive book on fiction-writing techniques, Getting Into Character: Seven Secrets a Novelist Can Learn From Actors (John Wiley & Sons). She is now working on her 20th book.

In addition to Exposure, Brandilyn’s other latest release is Always Watching, first in The Rayne Tour series—young adult suspense co-written with her daughter, Amberly. The Rayne Tour series features Shaley O’Connor, daughter of a rock star, who just may have it all—until murder crashes her world. 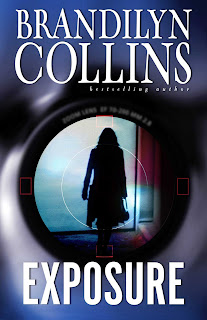 When your worst fear comes true.

Someone is watching Kaycee Raye. But who will believe her? Everyone
knows she’s a little crazy. Kaycee’s popular syndicated newspaper
column pokes fun at her own paranoia and multiple fears. The police in
her small town are well aware she makes money writing of her
experiences. Worse yet, she has no proof of the threats. Pictures of a
dead man mysteriously appear in her home—then vanish before police
arrive. Multisensory images flood Kaycee’s mind. Where is all this
coming from?

Maybe she is going over the edge.

High action and psychological suspense collide in this story of terror,
twists, and desperate faith. The startling questions surrounding Kaycee
pile high. Her descent to answers may prove more than she can survive.

“Brandilyn Collins is a master of suspense, and Exposure is her best book yet!” ~Dianne Burnett, Christianbook.com

Posted by Illuminating Fiction at 1:40 PM No comments: