The Judgment Stone
Thomas Nelson (May 14, 2013)
by
Robert Liparulo

Former journalist Robert Liparulo is the best-selling author of the thrillers Comes a Horseman, Germ, Deadfall, Deadlock, and The 13th Tribe, as well as The Dreamhouse Kings, an action-adventure series for young adults. He contributed a short story to James Patterson’s Thriller, and an essay about Thomas Perry’s The Butcher’s Boy to Thrillers: 100 Must Reads, edited by David Morrell and Hank Wagner. He is currently working on the sequel to The 13th Tribe, as well writing an original screenplay with director Andrew Davis (The Fugitive).

When not writing, Liparulo loves to read, watch (and analyze) movies, scuba dive, swim, hike, and travel. He lives in Monument, Colorado, with his wife Jodi and four children: Melanie, Matthew, Anthony, and Isabella.

What if praying became a curse instead of a blessing?

Former Army Ranger Jagger Baird thought he had his hands full with the Tribe—the band of immortal vigilantes fighting to regain God’s grace by killing those opposed to Him. But that was before he encountered the ruthless group of immortals called the Clan. The Clan is after a prize that would give them unimaginable power—a piece of the Ten Commandments known as the Judgment Stone.

Those who touch the Stone can see into the spiritual world: angelic warriors, treacherous demons, and the blue threads of light that signal the presence of believers in communion with God.

By following the blue beam radiating from those closest to God, the Clan plans to locate His most passionate followers and destroy them.

Jagger quickly realizes his high-tech gadgetry and training are no match for these merciless immortals. But how can he defeat an enemy who hunts believers through their prayers . . . and won’t stop until they’ve annihilated all those close to Him?

In this high-action thriller, best-selling author Robert Liparulo examines the raging battle between good and evil on earth . . . and beyond.


If you would like to read the first chapter of The Judgment Stone, go HERE.

Posted by Illuminating Fiction at 4:16 PM No comments: 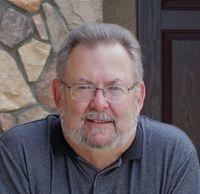 Alton L. Gansky is the author of 24 novels and 8 nonfiction works, as well as principle writer of 9 novels and 2 nonfiction books. He has been a Christie Award finalist (A Ship Possessed) and an Angel Award winner (Terminal Justice) and recently was award the ACFW award for best suspense/thriller for his work on Fallen Angel. He holds a BA and MA in biblical studies and Lit.D. He lives in central California with his wife.

In addition to his own writing, Alton Gansky has consulted and provided editing/ writing service to several CBA publishers and written copy, video scripts, and other works for the general business market. Through Gansky. Communications he has consulted with publishers and agents, as well as provided editing services. He is “the go to guy” for co-writing having been selected by Penguin, Waterbrook, Broadman Holman, and other publishers to work with their top tier authors.

Gansky is in frequent demand at writer’s conferences having taught and keynoted in California, Arizona, New Mexico, North Carolina, Delaware, Washington, and Canada. He has also been guest lecturer on suspense writing at Taylor University in Indiana.

A man’s lifeless body is found in the fresh soil of San Diego’s botanical garden. Cause of death is asphyxiation, an easy call for the medical examiner. More mysterious, however, are the tiny drops of blood on the victim’s skin, resulting from hundreds of punctures.

A rabbi leaving his house for work expects a regular day at the synagogue. That quickly changes when he discovers a dead man on his front lawn, clearly beaten to death.

Motorcycle riders racing along the empty streets of an abandoned military base stumble across another man’s corpse, its skin revealing long, red-purple marks of a thrashing given with wood dowels.

The numbers mount. Each week another victim and another mysterious clue in a game of mass murder the police don’t want to lose. The solution rests with Dr. Ellis Poe, a religious professor who only wishes to be left alone with his books and classes.

But evil must be faced, and the choice is no longer his own.


If you would like to read the first chapter of Wounds, go HERE.

Posted by Illuminating Fiction at 5:43 PM No comments: